In August 2016 Eden Arts proudly launched a new event - the Mt Eden Chamber Music Festival. This has become an annual event on the Mt Eden Village calendar and takes the form of three one-hour early evening/afternoon concerts in the heart of Mt Eden over the course of a weekend, featuring some of the best professional chamber musicians in the country.

The Chamber Music Festival is a welcome supplement to our musical matinees which have been an annual part of the Eden Arts programme for a long time with the aim of supporting young emerging musicians.

Now in its sixth year, the Festival has welcomed a range of eminent musicians from across New Zealand including NZ String Quartet, NZ Chamber Soloists, NZBarok, Aroha String Quartet, Auckland Piano Trio, soprano Amelia Berry, bass Wade Kernot, pianist Rosemary Barnes and clarinettist Peter Scholes, among others. Thank you to all who have supported this boutique music event so far and we look forward to welcoming you back soon!

THIS EVENT HAS BEEN POSTPONED TWICE - THANK YOU FOR YOUR UNDERSTANDING AND SUPPORT AS WE WAIT PATIENTLY TO BRING YOU THIS YEAR'S STELLAR LINE-UP OF PERFORMERS! 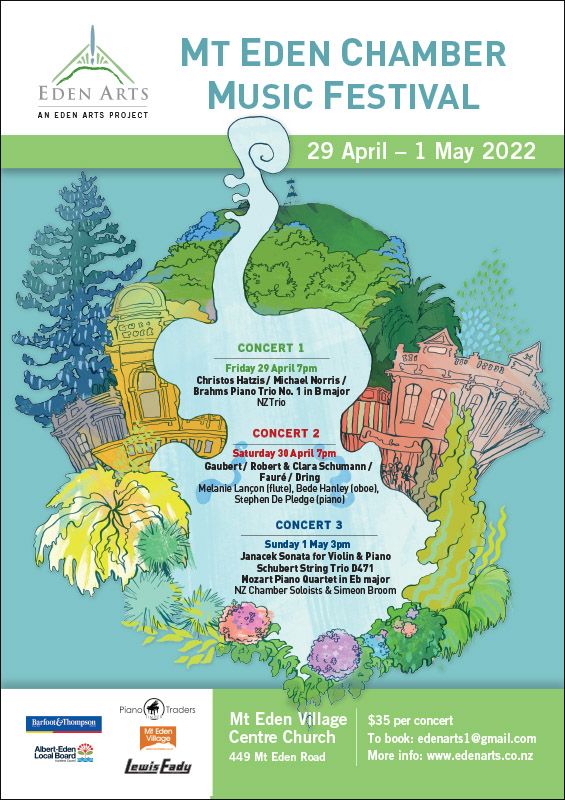 Simeon Broom grew up in Mt Eden and began the violin at the age of 4 years. He completed Performance Violin studies at Auckland University with Mary O’Brien, during which he won the inaugural University Concerto Competition. Simeon moved to Germany on a Scholarship and studied at the Hochschule für Musik, Düsseldorf. In 2004 he was finalist in the ‘Young Musicians’ Competition New Zealand’, and has performed as soloist with orchestras both in New Zealand and in Germany. In 2021, Simeon has performed as soloist with the NZSO, in Vivaldi & Piazzola’s ‘Four Seasons’.

In 2008, Simeon completed his Masters at the Guildhall School of Music and Drama, studying with David Takeno and Jack Glickman. He was winner of the Sonata Competition (with Rachel Church) at the North London Music Festival. He has played in orchestras such as the Royal Opera House (Covent Garden), English National Opera, City of Birmingham Symphony Orchestra, the Bergen Philharmonic and the Sydney Symphony, before taking up his position in the NZSO.

Simeon is a passionate chamber musician and has toured for Chamber Music New Zealand. He was a core player in the inaugural Mt Eden Chamber Music Festival in 2016, performing in all three concerts in an intensive programme of German Romantic music as well as bringing his professional colleagues to the stage in a variety of musical ensembles, including the Aroha Quartet.

Simeon has been artistic director of this festival since its conception. Inspired by the high calibre European music festivals he experienced while living overseas, his long held dream of bringing a similar event to Mt Eden came to fruition in 2016. The restoration of the Mt Eden Village Centre Church meant that an ideal chamber concert venue was now available and this, coupled with the backing and event organisation provided by local arts trust Eden Arts, has led to a hugely successful annual festival which has already become a firm favourite on the local arts calendar.

Melanie Lançon was appointed Principal Flute of Auckland Philharmonia in 2018 and made her solo debut with the orchestra in 2020. Originally from the United States, Melanie has enjoyed a vibrant career abroad and here in New Zealand, having recently toured with Chamber Music New Zealand and serving as Juror for the 2019 Gisborne International Music Competition.  Praised for her captivating interpretations of the symphonic repertoire, she has appeared as guest principal with the orchestras of Seattle, San Diego, Fort Worth, Louisiana, and Pacific Symphony (California) in America. Previously, Melanie held the position of Principal Flute with Central City Opera in Colorado, and was a Fellow with New World Symphony in Miami, Florida. Other engagements include Utah Symphony/Opera, Camerata Pacifica, Houston Grand Opera/Ballet, American Ballet Theatre, Baton Rouge Symphony, Civic Orchestra of Chicago, National Repertory Orchestra, and the National Orchestral Institute. Melanie received her Master’s degree from Rice University and earned her Bachelor’s degree with honors from Northwestern University.

Born in Saskatoon, Canada, Bede Hanley began learning the oboe at ten, eventually going on to earn his Bachelor of Music degree from the Cleveland Institute of Music, Ohio, where he studied with John Mack, the principal oboe of the Cleveland Orchestra and a highly esteemed teacher.
Following several seasons with Spain’s Orquesta Sinfonica de Galicia, Mr Hanley, admired for his "gorgeous tone and buoyant phrasing", first joined the Auckland Philharmonia Orchestra as Principal Oboe for the 2008 and 2009 Seasons. He was then appointed Principal Oboe of the Winnipeg Symphony Orchestra, Canada, a position he held for four years, before rejoining the APO in 2013 as Section Principal Oboe.
Mr Hanley has performed with many symphony and opera orchestras internationally.
He is an active soloist, recitalist, chamber musician and teacher, and a Yamaha Artist.

New Zealand pianist Stephen De Pledge performs internationally as a soloist and chamber musician. He studied with Joan Havill at the Guildhall School of Music and Drama in London, where he won the Gold Medal in his final year. He subsequently spent two years as a Junior Fellow at the Royal College of Music, and studied in Paris with Yvonne Loriod. After winning the NFMS Young Concert Artist Award he made his debuts in the Wigmore Hall, Queen Elizabeth Hall and Barbican Hall in London and has since given concerto performances with the BBC Scottish Symphony, Bournemouth Symphony, New London and Philharmonia Orchestras, amongst others. Solo performances in recent seasons have taken him to Tokyo, Cologne, Paris and New York, as well as throughout New Zealand, where he has been based since 2010. He has performed with many musicians, including Dame Felicity Lott, Dame Evelyn Glennie and Viktoria Mullova. His extensive discography includes works by Bliss, Barber, Messiaen, Shostakovich and Brahms, and premiere recordings of Arvo Pärt, Henryk Gorecki, Ned Rorem and the 1st piano concerto of Lyell Cresswell for Naxos, which was written for him in 2012. In addition to his performing schedule Stephen De Pledge has a teaching position in the piano department at the School of Music, University of Auckland.

The New Zealand Chamber Soloists was formed in 2006 by three of New Zealand’s leading solo and chamber musicians, pianist Katherine Austin, violinist Lara Hall, and cellist James Tennant. Currently in residence at the University of Waikato Conservatorium of Music, the NZCS has undertaken four national tours under the auspices of Chamber Music New Zealand, and a number of tours in Europe and the USA, as well as performing in China, Singapore, South America and Australia. In 2012 they gave the world premiere of two works written for them by John Psathas, Corybas and Aegean, in the Casa dei Mezzo summer music festival in Crete, as well as performing in Italy’s prominent Festival Pontino and at four concerts in Greece’s award-winning Festival of the Aegean. Further tours to U.K. and Europe in 2015 were received with invitations to return which they did in 2016, and an invitation to perform Beethoven’s Triple Concerto in Mexico resulted from this. They have given chamber music masterclasses at the Yong Siew Toh Academy of Music in Singapore, the Shanghai Conservatory of Music, the Australian National Academy of Music (Melbourne), the Yehudi Menuhin School (U.K.), Monash University (Melbourne) and the Vicenza Conservatory of Music (Italy). For 2018/19 they have been invited by BCM Director Julian Lloyd Weber to give concert and masterclasses at the Birmingham Conservatory of Music (UK).

Individually, the members of the group have performed concertos in over twelve countries and have had many works written for them by New Zealand’s leading composers. The group has released two CDs of New Zealand works, Ahi (2008), and Corybas (2014), and a CD of trios by Rachmaninoff, Babajanian and Shostakovich entitled Elegy (2010), which received international critical acclaim. Corybas features the complete piano chamber works of NZ-Greek composer John Psathas, including his Piano Quintet with Amalia Hall (violin) and Robert Ashworth (viola). In addition to their active performing and recording schedule, the group members are highly regarded as teachers at the University of Waikato Conservatorium of Music, where their students have repeatedly enjoyed success in national and international solo, concerto and chamber music competitions over recent years.